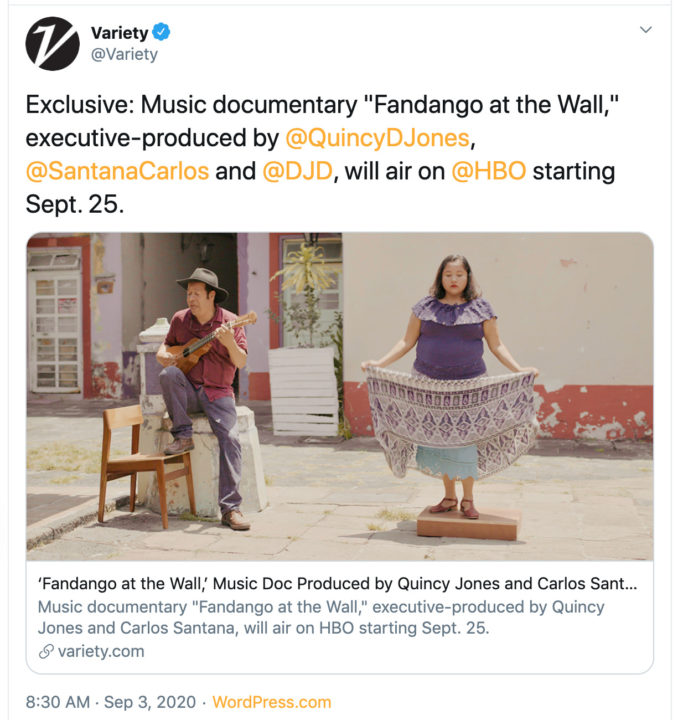 Music documentary “Fandango at the Wall,” chronicling an extraordinary journey undertaken by  musician Arturo O’Farrill and producer Kabir Sehgal — both multiple Grammy winners — to Veracruz, Mexico to recruit master musicians for a live album recording at the U.S.-Mexico border wall, is set to premiere on HBO on Sept. 25. HBO Latino and HBO Max will also carry the film.

A joint production between Tiger Turn Productions and Sony Music Latin, the feature-length doc was directed by Varda Bar-Kar and executive produced by Quincy Jones, Andrew Young and Carlos Santana. It serves as a timely reminder of how diplomatic relations between the United States and Mexico have soured due to President Trump’s rhetoric and his efforts to build a border wall separating the neighboring countries.

The bond of music ties together the citizens of Mexico and those of Mexican descent who’ve kept alive the sounds and traditions of son jarocho, a 300-year-old folk form of playing that combines indigenous Spanish and African melodies and rhythms. The annual “Fandango Fronterizo” music festival serves as the heart and beat of the film by showcasing festival founder Jorge Francisco Castillo, who he invites Sehgal and O’Farrill to Veracruz, Mexico to meet the masters of son jarocho.

The crew travels through the scenic countryside of Veracruz in a bid to find musicians to join them at the upcoming border festival. Featuring players on both sides of the U.S.-Mexico border wall, the gathering is as much a celebration of friendship and unity as it is a showcase of musical talent. The film features remarkable and dynamic music that blends quintessential son jarocho songs with lush big band jazz arrangements.

“I appreciate HBO’s commitment to providing a platform for diverse filmmakers who tell compelling stories with authenticity, artistry, and layered meaning,” said Bar-Kar. “I’m grateful that our cross-cultural collaboration that celebrates the richness of diversity will join the ranks of HBO’s magnificent programming.”

Added Leslie Cohen, senior vice president of content acquisitions at HBO and HBO Max: “We’re thrilled to premiere this exceptional and heartwarming film, which explores US-Mexico relations through beautiful Mexican folk music. We believe that the film’s meaningful story and magical music will resonate deeply with our audience. ‘Fandango at the Wall’ is a must-see addition to our programming.”

Doug Davis is also a producer on “Fandango.” The music industry attorney has numerous screen credits, including as EP of 2019’s “Aretha! A Grammy Celebration for the Queen of Soul.” In February, Davis won a Grammy for his work on the  2018 big band album “American Dreamers (Voices of Hope, Music of Freedom),” which spotlighted 53 DACA recipients from 17 states and 17 countries of origin who have become musical prodigies. The album won for best large jazz ensemble album, best improvised jazz solo (“Don’t Fence Me In”) and best arrangement, instrumental or a cappella (“Stars and Stripes Forever”).

“We are elated to partner with HBO, which has long demonstrated a commitment to documentarians like us who make socially-conscious films that explore important issues like immigration and identity,” said Davis.

Added Sehgal: “Our film shows how the border can become a place of friendship and amity by harnessing the power of Afro-Mexican music known as son jarocho. I’ve been making music for decades, and I’ve never experienced a more enveloping and transformative artform.”

Among those who appear in “Fandango at the Wall” are son jarocho legends Andrés Vega, Martha Vega, Ramón Gutiérrez, Wendy Cao Romero, Tacho Utrera, Fernando Guadarrama and Patricio Hidalgo. Accompanying the project is a book and album with the same title published by Hachette and Resilience Music Alliance.