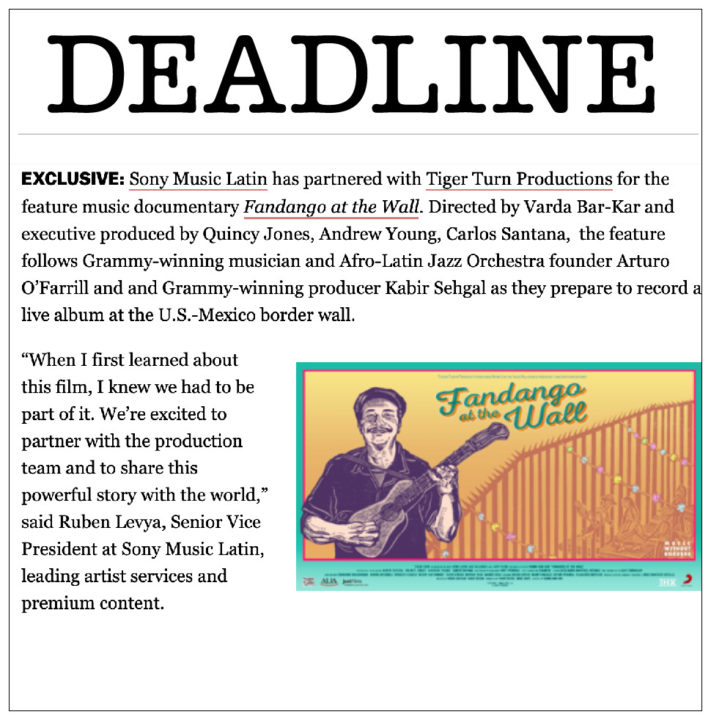 “When I first learned about this film, I knew we had to be part of it. We’re excited to partner with the production team and to share this powerful story with the world,” said Ruben Levya, Senior Vice President at Sony Music Latin, leading artist services and premium content.

“The film explores the roots of Latin music and, in particular, Afro-Mexican music known as son jarocho. It is both timely and timeless, as it looks at the issue of immigration between the United States and Mexico,” said Sehgal, who is also a producer on the film. “We’re thrilled to partner with Sony Music Latin, which has long been the vanguard of creative content throughout the Americas.”

Combining art and advocacy, the film is inspired by the “Fandango Fronterizo” annual music festival which unites people in son jarocho‘s song and dance on both sides of the Tijuana-San Diego border. Before recording, “Fandango Fronterizo” organizer, Jorge Francisco Castillo, took O’Farrill and Sehgal on an inspiring journey of Veracruz, Mexico, where son jarocho, the 300-hundred-year-old folk music called combining indigenous, Spanish, and African traditions originated. As they travel to the far regions of the Veracruz coast, they meet legendary son jarocho musicians and artisans and recruit them for the upcoming festival. Their travels culminate at the annual border celebration, promoting peace, and celebrating unity.

“I’ve been captivated by the spirit of Mexico’s vibrant son jarocho music community throughout the magical journey of making Fandango at the Wall,” said Bar-Kar. “I love making and watching music films, and I’ve long admired and appreciated the works that Sony Music Latin has brought to life.”