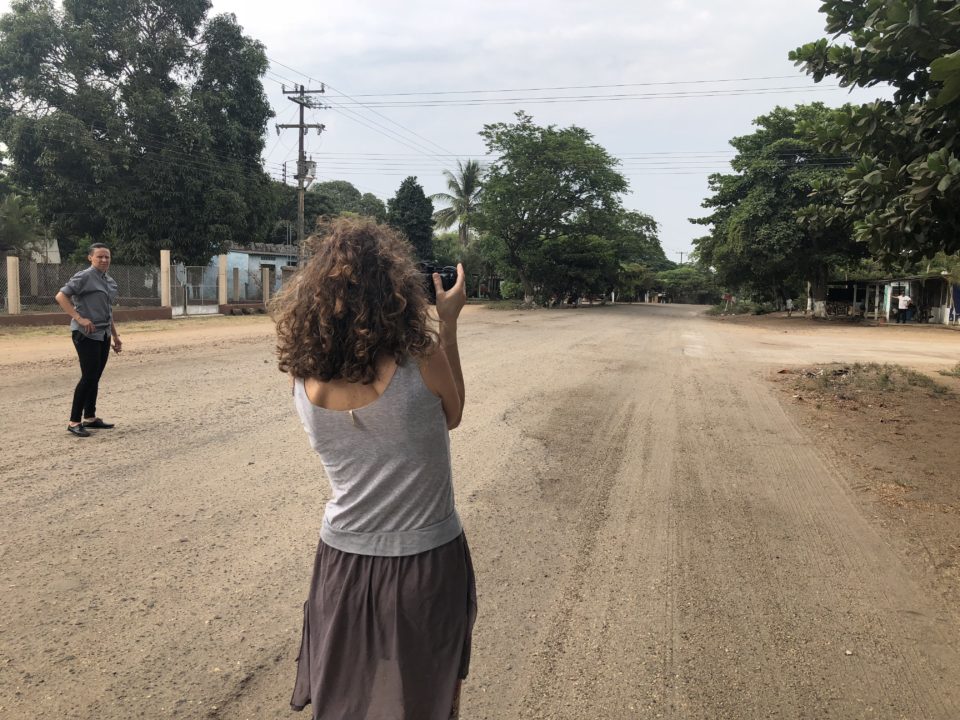 The photo above shows me filming a shot for my new feature documentary Fandango at the Wall.  We were heading to see master zapateado (son jarocho dancer) Marta Vega at her family compound in Boca San Miguel in Veracruz, Mexico. I hadn’t realized it would take us approximately six hours to get there.  We traveled on dirt roads like this one, past houses painted with rich saturated pinks, yellows, greens, purples, past forests, small family farms. It was tempting to film non-stop.  It was that captivating.  Veracruz really is a mystical land full of unexpected wonder.  It is also where drug cartel violence is rampant which explains the guard watching over me.  Our visit to the Vega Family Compound was our introduction to son jarocho a 300-hundred-year-old folk music combining indigenous, Spanish, and African traditions

FANDANGO AT THE WALL follows Arturo O’Farrill, maestro Afro-Latin Jazz Orchestra founder, and Kabir Sehgal, bestselling author and music producer, as they prepare to record a live album at the U.S.-Mexico border wall. Their project is inspired by the annual music festival called Fandango Fronterizo, which unites people in son jarocho’s song and dance on both sides of the Tijuana-San Diego border. Before recording, Fandango Fronterizo organizer, Jorge Francisco Castillo, takes O’Farrill and Sehgal on an inspiring journey of Veracruz, Mexico, where son jarocho, originated. As they travel to the remotest regions of the Veracruz coast, they meet legendary son jarocho musicians and artisans and recruit them for the upcoming festival. Their travels culminate at the annual border celebration, promoting peace, and celebrating unity. From executive producers, Quincy Jones, Andrew Young, Carlos Santana, producers Kabir Sehgal and Doug Davis, and director Varda Bar-Kar, the film introduces the beautiful music of the region through intimate storytelling and captivating concert footage. FANDANGO AT THE WALL is a powerful reminder of music’s ability to bridge cultural barriers.

Read more about in our first major article in Deadline: