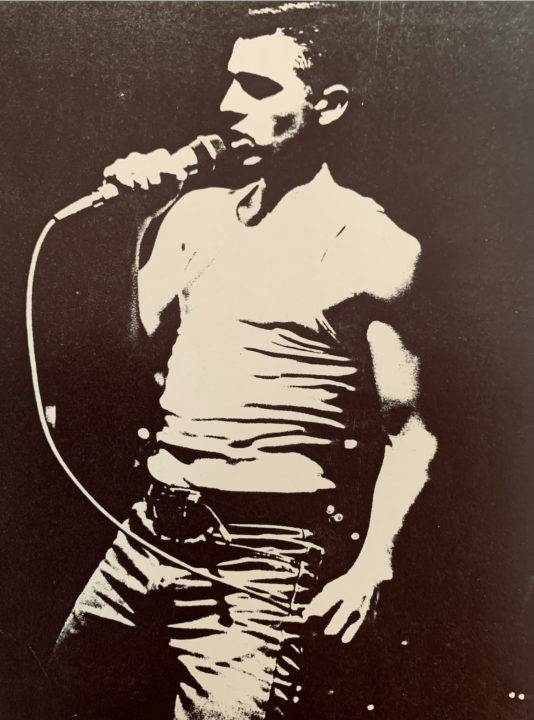 It was day one of my sophomore year at Cornell University. The day my life was to be forever altered, blessed beyond my wildest dreams. It was the first day of Eva Marie Johnson’s acting class. The day I met Patrick.
About nine of us students piled into the small open space classroom on the top floor of Lincoln Hall, a classic east coast stone structure smothered with ivy. Professor Johnson’s deep booming voice commanded us to sit on the floor and take off our shoes. A young man sitting across from me removed shiny brown cowboy boots stitched with rainbow thread. His feet were bandaged.  Why?  I was curious.
He had a crew cut. An angular face with deep-set chocolate brown eyes. Tight faded blue jeans and a tighter short-sleeved black t-shirt hugged his compact body. You could tell that he was “working class”. You didn’t see many of them at Cornell.
Eva Marie handed each of us a ball of clay. “Create something to sell to the group. You want to make as many sales as possible,” she told us.
I got busy making an elaborate tentacled pleasure-inducing mechanism that you could attach to all parts of your body. The guy with the bandaged feet set down his ball of clay and left the room. “Huh,” I said to myself. “He’ll never be able to sell that.” But, when it was his turn, he pulled a chair to the front of the room. He sat down and held up the ball of clay gazing at it as though it were the most precious object in the world. His words slipped from his mouth like velvet bullets.
The ball of clay became an apricot. He was in a prison. His wife had brought him the apricot. He wanted to eat it, but he suspected she had hidden a bee inside it. If he bit into the apricot the bee might sting him.
He got me.
I could have sworn our eyes had met. That we had a knowing silent exchange, and that after class he would approach me. But the apricot salesman pulled his cowboy boots and left without even glancing my way. I couldn’t believe it.
He was well out of sight when I flew out of the classroom, down three flights of stairs that landed me on the ground floor. There he was, on the other end of the hallway about to slip out of my life forever. “Hey, apricot!” It just came out. He stopped, turned to look at me, then left the building.