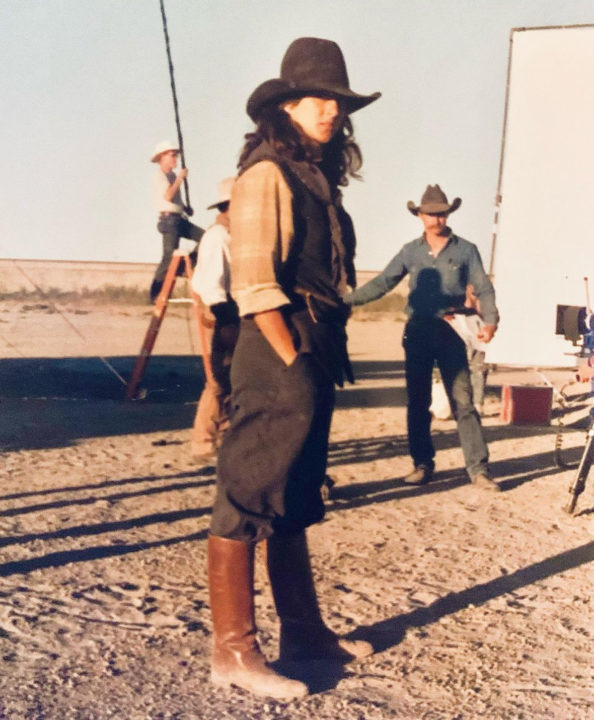 I was still living in San Francisco when my friend Christopher Coppola called me to see if I would script supervise his first feature film, a period western about cowboy legend Hop-along Cassidy. He planned to shoot in Elko, Nevada at a huge ranch where I would have to stay as a lodger for several months. He was casting real cowboys for most of the roles and the whole film would be shot on location. His cousin Roman Coppola was producing. When we were both film students at SFAI, Christopher composed music for my short films and I “script supervised” his. Honestly, I was just winging it and did not really know the breadth of duties a script supervisor was responsible for. Still, how could I possibly refuse an invitation to such a spectacular adventure? (And it was.) I ordered a book about script supervision and read it twice and highlighted it before heading to Elko. I put every bit of my book know-how to use in that production. It was an incredibly ambitious project which ended up taking much longer than anticipated. The production extended from fall into winter. At the start, we endured blinding heat. Later, we found ourselves in snow flurries at midnight huddled around bonfires. I became mesmerized by cowboy culture. Those massive silver belt buckles worn like trophies declaring impossible rodeo wins. Each cowboy had an idiosyncratic way of folding up the edges of their cowboy hats—as unique as a thumbprint. Their love affairs with their horses. The scent of whiskey mixed with leather, dust and smoke permeating the atmosphere at dawn when we were racing with the sun to get our first shot. The poetry recited with a drawl and a sensitivity defying their brutish and crass bantering amongst themselves at neon soiled gambling casinos. And then there was the land—Joshua trees, sagebrush, cactus, lizards scuttling here and there. Dust transforming into glitter at magic hour in the wake of a gallop. Those lazy long shadows accompanied by cricket song approaching twilight. One day, I was asked if I wanted to be an extra. It’s no surprise I chose to be a cowpoke.