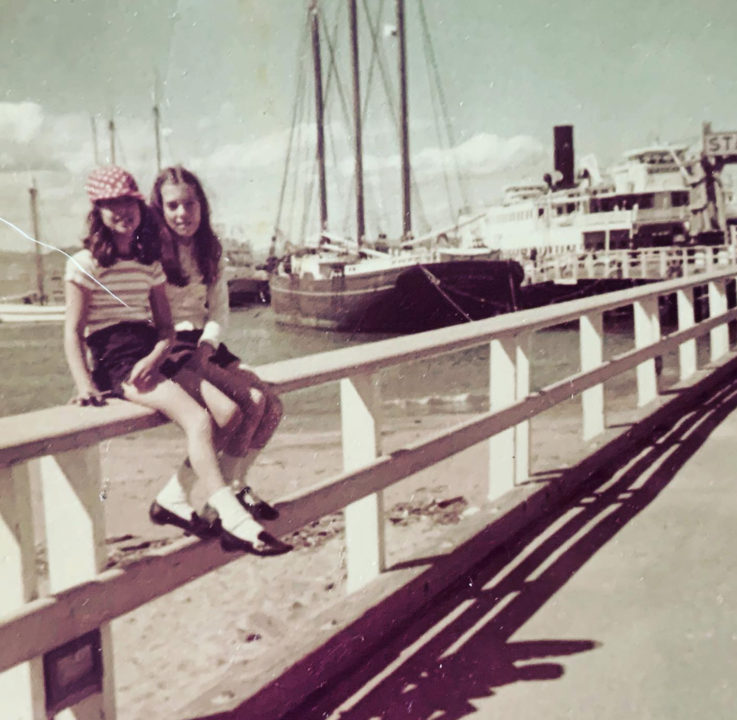 Unbelievably, I actually remember this red cap with white polka dots. Here my sister and I are at Fisherman’s Wharf perched beside San Francisco Bay. We’re wearing the patent leather shoes we traveled from England. I remember my first days at the all-girls private school where I finally landed. The girls found my name odd & called me “farta”. It didn’t bother me. I didn’t know what that meant. They found it hilarious when I called my eraser a “rubber”. Truthfully, I had been through so much by then, their childish jabs had no effect and I soon made friends. What I did find disturbing was the American children’s lack of civility. They would talk back to the teacher, ignore her, and mock her behind her back. I found it shocking. My first teacher in the U.S. was Mrs. Carter. She must have been in her late twenties. She was pretty with a splotch of red covering half her face which she attempted to hide under pancake make-up. She wore mini-skirts and smiled often. Her hair was fluffy like auburn cotton candy. She was the first of many benevolent teachers whose kindness and love uplifted and fortified me to face the turbulence at home. It’s not easy moving to a new country and when we arrived in the U.S. the country was divided much like it is today. This made life more tumultuous, particularly because the liberal values I learned at school (and embraced) ran counter to the conservative values upheld at home. I kept silent about it but felt torn up inside. I ordered a bracelet engraved with the name of an American POW soldier in Viet Nam. After I had a nightmare in which San Francisco was so socked in with smog that the Golden Gate Bridge was overrun with residents trying to escape to Marin County. I volunteered to clean black oil off of seagull’s wings soiled by a massive oil spill in the Bay. I found solace in modern dance. I love leaping across the school auditorium in my bright pink striped leotard, shaping my body into trees, elephants, and seagulls. I wrote and directed a play about Ishi. And I made my first movie