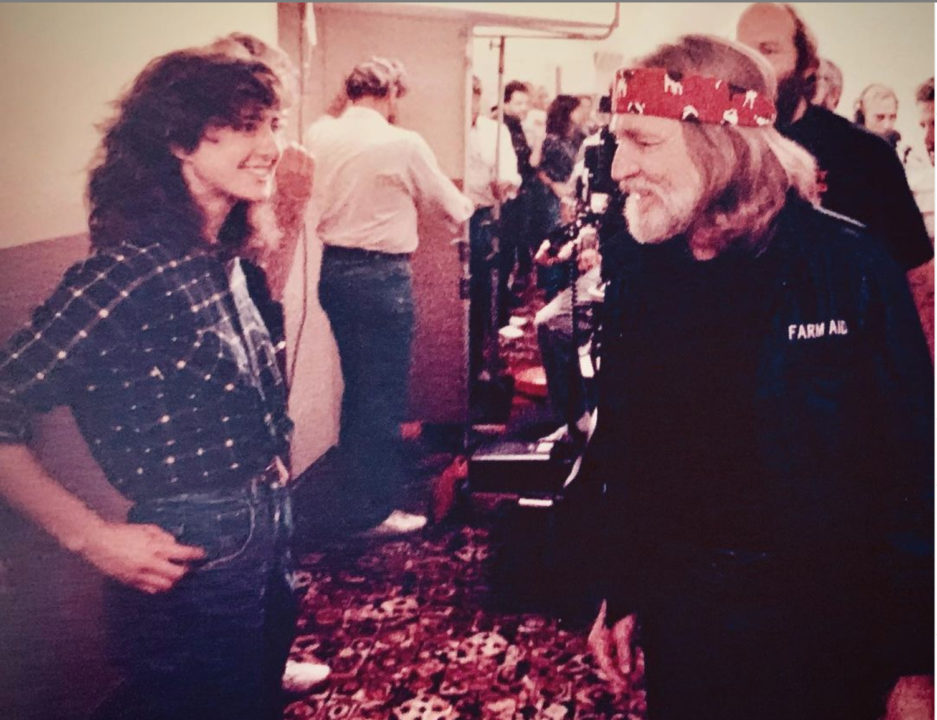 Yes, that’s me and Willie Nelson. It was the late 1980’s at a venue somewhere in the San Francisco Bay Area. I had graduated from the San Francisco Art Institute and managed to establish myself as one of the “go to” Production Assistants in the region. The legendary Haskell Wexler was helming this commercial shoot featuring Mr. Nelson. I was the 2nd AD assigned to escorting the infamous country star to the stage. I was sent to the parking lot to find him. Outside, I quickly discovered a huge looming black bus. The windows were smokey grey. I felt tiny and nervous when I knocked on the giant shiny black door at the front of the rockstar vehicle. It opened and a cloud of pungent marijuana smoke enveloped me (Years later I would work with Snoop Dog and have a similar experience except he was in an RV). A man’s voice invited me to come in. Inside, Willie was toking on a joint. He offered it to me. I politely declined. His lids were heavy. He moved as slow as a turtle. Slower. The diligent worker that I was, I became worried that he was too high to perform. He was gentle and kind as we slowly strolled together to the stage. I smiled and we chatted. All the while, I was wondering, “what’s going to happen when Haskell discovers Willie is high as a kite and can’t perform.” Our stroll timed perfectly. Haskell was ready to shoot just as we arrived to the stage. In the wings, a dim Willie strapped on his guitar and stepped onto the brightly illuminated stage. I remember he blinked a few times. The music began to play, Willie began to strum, and to much amazement when he sang the whole world suddenly felt more vibrant and alive. It was as if he had turned on a light switch within him. His performance was glorious. He literally lit up the stage. From that day on I became a fan.